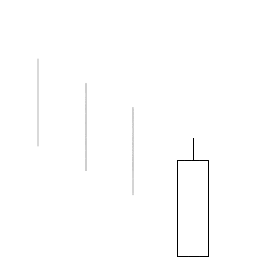 A Bullish Belt Hold, known as “yorikiri” in Japanese, is a single Japanese candlestick pattern that suggests a possible reversal of the current downtrend.

Like the Marubozu candlestick pattern, the bulk of the candle’s meaning is found in its size because the shadows (or wicks) are either tiny or nonexistent.

Occurring after a downtrend, the Bullish Belt Hold isn’t difficult to spot and it’s also quite common. To identify it, look for the following criteria:

The Bearish Belt Hold pattern is the opposite of the Bullish Belt Hold, which is a single black candle that forms after an uptrend.

The Bullish Belt Hold candle’s opening price is at the low of the trading session.

During the session, however, the price rallies up and it closes at (or near) session highs, forming a white candlestick.

To better analyze a Bullish Belt Hold candlestick, look for the following observations: