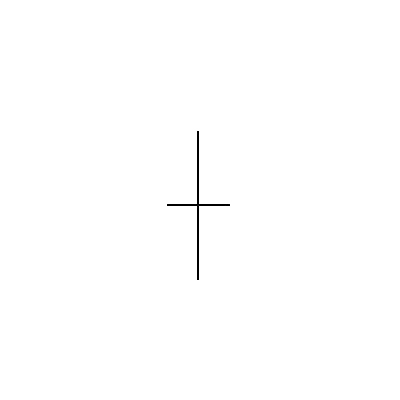 A Doji is a single candlestick pattern that is formed when the opening price and the closing price are equal. The lack of a real body conveys a sense of indecision or tug-of-war between buyers and sellers and the balance of power may be shifting.

The length of the upper and lower shadows can vary and the resulting candlestick looks like a cross, inverted cross, or a plus sign.

By themselves, the Doji has usually considered a neutral pattern but is part of multiple-candlestick patterns.

The Doji is the smallest and simplest of all candlesticks, making it very easy to identify. Look for the following criteria:

The horizontal line of the Doji shows that the open and close occurred at the same level.

The vertical line of the Doji represents the total trading range of the timeframe.

The shape of the Doji signifies indecision between buyers and sellers.

When you see a Doji candlestick pattern, you know that the session closed very near to where it opened, which is why the candle doesn’t have a body.

Indecision reigns, as neither the buyers and sellers are in control.

A “tug-of-war” is occurring, during which neither party is dominant.

Although the price may have fluctuated throughout the session, it was driven back to its original, opening price.

This moment of indecision often signals a trend reversal.

A Doji is not as significant if the market is not clearly trending, as sideways or choppy markets are indicative of indecision.

If the Doji forms in an uptrend, this is normally seen as significant, since it signals that the buyers are losing conviction.

If the Doji forms in a downtrend, this is normally seen as significant, since it signals that the sellers are losing conviction